In the early seventies Sister Carrita worked on connecting ordinary folk to art and where it came from. The dirt on the cross carrying slave’s feet as he is about to hang Peter upside down captures Caravaggio’s ordinary look at almighty topics. The line from the lectures of Sister Carrita that rings between my ears even after all the other ringing has stopped is, “We have no art, we only do the best we can!” There is an empty escape in the line, yet there is a counter-cultural undercurrent that crowns each one of us as image-bearing
-makers of new perspectives. 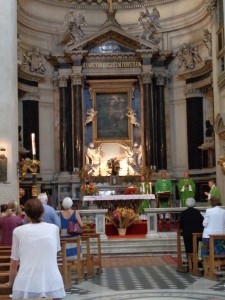 Walking into the fourth Santa Maria church in Rome (there are over thirty catholic churches with Santa Maria as part of the common name) I was drawn into a somber and dated liturgy, a flashback to a church before it put effort into bringing the good news down to earth. The mass was mumbled to the reverend faithful and the cantor led the only song. As churched as I was, this was foreign territory. The Sister Carrita line mumbled through my brain. We only do the best….

The service ended and the gathered faithful and a hundred visitors moved over to a small chapel off to the left of the altar. There hanging for all to see and touch were two paintings by Michelangelo Mersi da Caravaggio — works created at the turn of the 16th century for the chapel of the church.

What troubled me is that Carravagio was a radical painter. Brought the ordinary to life. Somewhere between 1600 and 2015 the cutting edge of the good news, the newness left the church and the graffiti on church walls and graveyards descry that loss.

The best news is the Papal challenge to the churches in Europe to each adopt a Syrian refugee. They may even bring a few good artists to the fold… God knows the church could use a few with something radical to say. 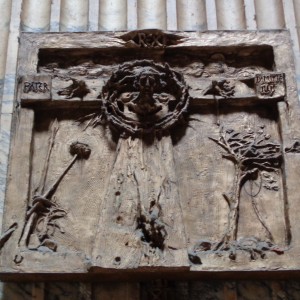 The dirt in the Caravagio painting, the skulls that decorate most European churches, the crypts beneath the churches all speak to the dead end earthiness of life. The irony is that the church could have a few words to say about this living with hope stuff if it let the ordinariness of art sneak in.