The faces of gods and evil are interchangeable on this small island.  Bali is an island located at the southern end of a chain of islands known as Indonesia.  Population ranking #5 in the world. (Approx 270 million) The Balinese do not speak Indonesian, have retained some Dutch cuisine and have created a practical co-existence of their Hindu beliefs and their  Bhudist lifestyle.

In the central northern region of Tabanan in the city of Candikuning there is a collection of god  figures that darken the most overcast of skies. A monument to seriousness. 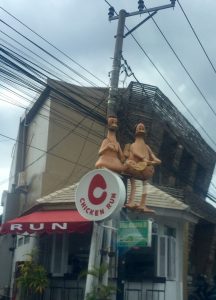 In the wires near Seminyak a pair of chickens are set to run outside an almost fast food restaurant.  The juxtaposition of the sacred with the secular creates a landing-strip for all the exiled.

Between temples, beaches churches and meetings we too are feeling at home!