On one of the older streets in Bangkok the glittering neon predicts the emergence of a city of lights. I took a moment, high risk as Margaret puts it,  to pose in the middle of the street.  I found an embroidery shop that made three pirate editions of Last Door gear with logos large enough to capture in photographs. The women pose next to the Khaosan Road t-shirt just before the merchant tries collect a royalty for taking the photograph.

The contrast between the street vendors on Khaosan and the corporate peddlers in Siam Centre Mall is evidenced in this image.  Sneaking a hat into the pseudo robot was met with equal aggressive demands for royalty payments.  They were not as receptive to the photo bomb as I had hoped.

This re-issue of the Remington manual typewriter could even bring Margaret out of retirement.  As she said, “there is no one left who knows how to use one of these!”

Stick with teddy bears and gifts for grandchildren  This thinking of work could ruin a whole journey!  The one element of shopping was the incessant bargaining.  In fixed price stores there was always a volume discount and in some street merchant vendors offering a third of the asking price would seal the deal.  Street transportation was completely negotiable and meters failed when traffic slowed.  The preface to a sure problem:  “I have a special price for you!”  The irony of the entire process is that we were in their country with the luxury of being able to travel and they were scraping as much money as they could from every transaction to buy food and drink.  Sometimes it is OK to let the marketplace collect their needs with dignity. 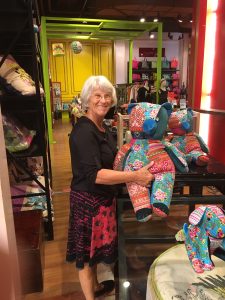