On a journey that has logged over 8000 kilometres there are those events that inspire and take your breath away but there are also those moments that will alter the universe forever.

To get perspective on an event like this I need to let you in on how Margaret sees things. The Soup can in the photograph was called out for being a little much for one family.

A few days ago we were walking through the formal gardens (yes war produces unusual acts of remembering) at the Plains of Abraham and I was backing up to get a better perspective on the picture. One more step and the step behind me jumped up and tripped me. I was flat on my back on the ground. Camera OK. Shot attached. Margaret simply asked if I was OK and if I could walk. Said something about not wanting to carry me the rest of the trip. 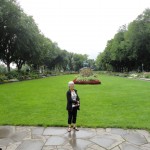 Gardening at the plains of Abraham

Between the campsite and the Bay of Fundy there was this staircase. Now Margaret is not one to fade from physical challenge, however at the midway mark she said something about wanting an elevator rather than a shower! 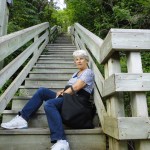 A few hours later, in the late afternoon, I was reading and dosing in a chair and she was sleeping in the Westphalia with the sliding door open.

I hear a startled scream and from the corner of my field of vision I eyed a chipmunk come flying out of the VW. Seconds later Margaret comes out of the van muttering something about what just happened. She said the animal was crawling up her leg. Cute chipmunks are now creatures of the nether regions and not allowed anywhere near the campsite.

She now naps with the doors closed and the screens installed. It is not the size of the soup can that startles us, but it is this coming on it unaware.