In the middle of a reservoir… A steeple! The flooding of a valley in 1935 or so created one great hydro-electric project. The locks and infra-structure are a testament to visionary leadership and communal goals. The steeple in the middle of the water reservoir an indication that a church once stood here. Closing churches was not such a big deal for the CCCP and this steeple is evidence. The question could be much more personal. Is the site C Dam about saving sacred trees and valleys or is it about some common good. Wandering around Russia has given me a greater respect for the important role that government plays in building infra-structure for the next generation. Railways, roads, water services, electricity, pipelines and even communications are at some level next generation visionary responsibilities of government. It could be that our collective willingness to sacrifice for healthcare may need to extend to addictions treatment. It might even mean that thirty years from now we will celebrate the leaders who drove the last spike, or wired the last mile from Site C. The small town of Uglich marks the spot where industry went away and stories of death and suicide became more important.

Somehow a little visionary review by the world might introduce wisdom. If you think only about the death of Dimitry by his own hand or by the hand of conspirators you and I will get caught in a blame game. Maybe there was a higher purpose. Sometimes it takes us mortals a whole lifetime to see the larger picture, the common good. 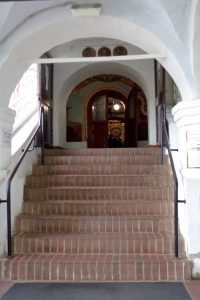 The glum entrance is deceiving because the detail is other. The detail captures flowers and the promise of spring. A promise that embedded in the difficult road, the dark way is a promise of morning. The Israelite wilderness wandering people knew that every dark night was lit by a candle of light and every bright desert day filtered by a cloud. Help for the journey that was more than direction! 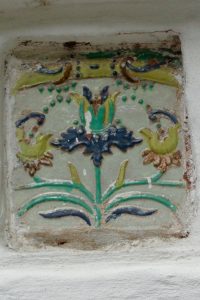 Behind the frescos and the Icons are stories and inside this church the story of the untimely death of Dimitry is remembered not only because of controversy but also because it was the end of the line for the Tsars. 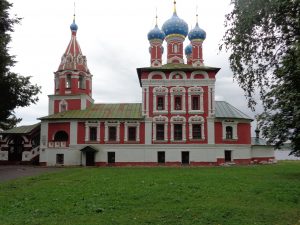 Inside the walls there is music. When the opening lines of “Our Father” reverberated in the knave of the church, a silent reverence settled on each of us gathered. Yes it was the classic rendition of “the Lord’s Prayer” sung in Russian by a seasoned liturgical choir. In the silence I could hear the phrasing for “give us this day our daily bread…” And somehow I knew that all our big issue striving was way beyond God. All we needed for the journey was a little bread. Direction, light, protection and even destination all come from God. I put one foot in front of the other and opened my eyes to see what was true, noble, right, pure, lovely and admirable and travelled in their company rather than my own. 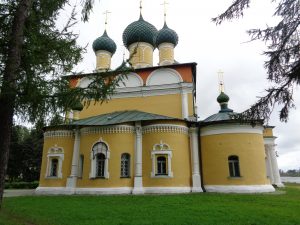