On that pile of unassuming stones.  Stacked like a library bookshelf to withstand the earthquakes.  Built in 200 ACE.  Nearly 2000 years old and two millenniums of earthquakes later.  The temple in the heart of the old city of Lima still stands.  A monument to human sacrifice.  Yes they sacrificed human beings.  Now all this might not sound so barbaric given current events.  Human life was acquiring value. Some mornings I wake up to news stories of refugees drowning and bombs falling and the devaluation continues.  Yet there are signs of hope.  The Olive Tree planted  by the Spanish invaders in Lima in 1760 was one of 2000 trees that marked hope, marked faith in the future, marked a great sense of historical foods.

In the walkways of the cloister a focal point leads toward the vanishing point of the future.  The growing of trees and plants speaks to a faith in creation and the future.  The sacrifice of human life mumbles with shame at “mans’ inhumanity to man” as the poet puts it.

It is lonely if history has no hope! 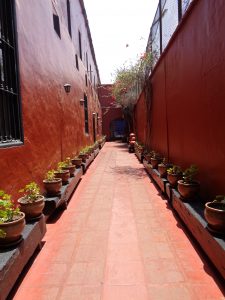