Above our heads four crypts for placing the bodies of the dead prior to mummifying them for burial.  In Incan civilization the life of the deceased is believed to flow from the passing body into the living streams that water the terraced gardens below.  This guard post was on one of the four routes through Cusco (the prior to 1536 capital of the Incan Empire).

Margaret and I stood in the rain at 1300 feet above the city of Cusco looking at gardens and guard posts and the agrarian roots of this civilization.

In the rhetoric of political language there are moments when translation and historical detachment have a very useful function.  There were moments in our wandering around the majestic Spanish cathedral that I was reminded of two historical events.  The Spanish Invasion of 1536 and the devastating sequence of earthquakes that culminated in 1970. 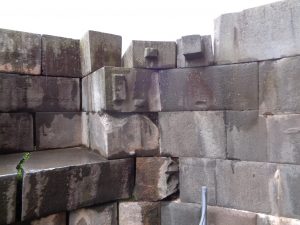 The carefully “Lego” cut stones were fit into walls and foundations to be seismically stable and stand to this day.  This altar to the sun was used for regular sacrifices and accessed through tunnels over a kilometre long that reached into the crypts under the Spanish built cathedral.  New places of worship built on the foundations of earlier civilization.  The gothic arches restored after the 1970 earthquake speak to ancient construction that was resilient to natural forces. 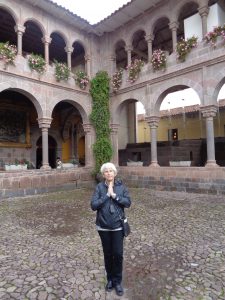 Looking at history is very humbling.  The scale of accomplishment of earlier generations is difficult to acknowledge in a post Google era.  The question for history will be whether technology was Invader or Conquistador.

One thought on “Spanish Invaders and Incan Conquistadors”