The “city of rocks” is built on more than 1000 outcroppings on which, with impressive hard work, the early monks built the Monastries of the “Holy Meteora.”  To this day six monastic communities continue in an organized way.  The sacred space was declared a UNESCO world heritage archeological site in 1988 and protected by Greek statute in 1995.  The history goes back to St Athanasios who climbed to the peak of the broad pinnacle in 1343 where eventually the monastery to the transfiguration was established.  (The term METEORA literally means suspended in the air)

In the course of centuries high peaks became an invitation to elevated spiritual struggles and prayer.  The role models of these devoted seekers or pillar-dwellers established the Meteora as places of collective and communal retreat.  Places to reach almighty heights.

Time and its corollary decay ravaged many of the original structures.  In the last fifty years the efforts of monastic communities and the ministry of antiquities has resulted in significant reconstruction.  The perched chapels, housing and holy places have attracted visitors and devotees. 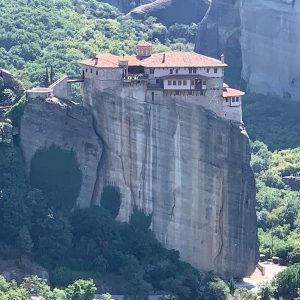 The granite grandeur of the “rocky forest” was geologically formed and reveals one of the world’s spectacular sites between heaven and earth.  The spirit of solemn sanctity is reminiscent of sites in Sri Lanka and Turkey.  A richness that is a gift to our times. A stone worth rolling away.