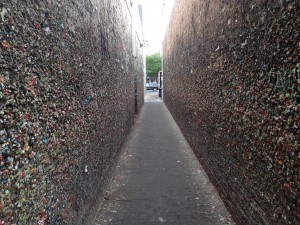 That narrow alley is made a bit more sticky by the wads of used chewing gum slapped on every brick, mortar joint and pipe as you walk between the walls of two heritage buildings in San Luis Obispo. The perspective is modified by the sanguine sweet odour of used cud. The disturbing visual coupled with the cheerful odour will alter my single sense view of the world. That is dead gum! No matter who the artist. Not even Coupland’s head at the Vancouver Art Gallery can make it less sticky! 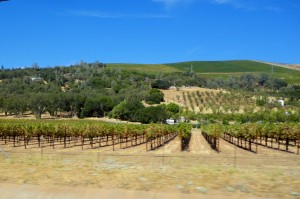 Rows of grapes tied down, pruned and watered turn the sage barren desert into a fertile field. The perspective that may need to shift is that the desert with infinite vistas and lack of clear signs of conquest may be more verdant than the watered vines. Then maybe this is how miracles happen. 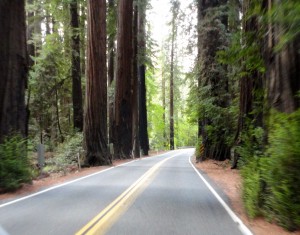 The stalwart trunks of the redwoods hold the shade canopy overhead as we meander through the roads that are tangled in the valley below. There were many days when the primitive air conditioning (roll down the windows, open the vents, put a damp rag on the dash and around my neck) of the VW were clearly from an earlier era. Days when our entitled perspective wanted air-con as we wove through the desert. This morning the trees delivered a cooling more refreshing than air conditioning and the morning dew on the needles added sent to the perspective. 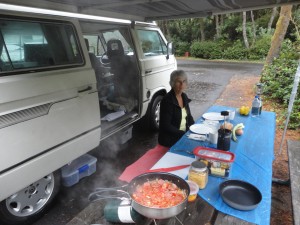 There in the skillet italian sausages sizzling with a few fresh tomatoes and leeks (there were no onions left) as they reduce into a pasta sauce. Beyond the canopy, rain. The nice thing about canopies and perspectives and smells and rain and heat is the variety. No two nights on this journey have been the same. From the perspective of the road they may look the same but when all the sensory experiences are coupled with the visual feast — this has been a banquet!