Changes in architectural styles and tastes may occur in 20 and 50 year swings. Sometimes in 5 years. Other changes such as the guard at Buckingham Palace might have been around as ritual for 500 years. But this changing of the guard in Seoul has been around since the 1400’s. That’s a long time to keep changing the guard. The current ceremonial incarnation of the event is more tourist driven than actual power transfer, yet somewhere in a country that prides itself in a female President, change has value as does ritual.

The ceremonial drum sounded by a head-sized mallet across the city hall square is more than a barrel of laughs. This drum punctuates ceremony and marks the constant of power. The protests in the square are supervised by yellow jackets. Right here ceremony holds sway. 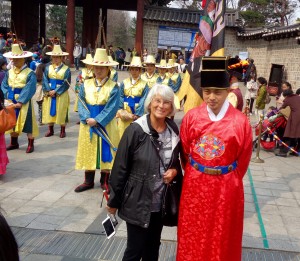 The photo-op guards! At the end of each ceremony the visitors swarm the bright vestments for that picture. The arms bearer at the ready knowing that visitors support the republic and keep the conversations away from the political and focused on the ceremony. Ceremony has weight in both Koreas.

The man of burden climbing the stairs with a set of packages that weigh far more than he does. The staircase has flashing lights indicating the way to F2 but no powered escalation for weight. The old guard still swaggers under the burden of servitude. 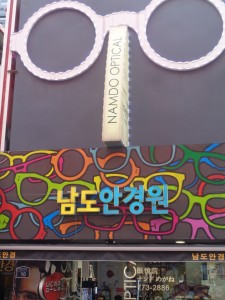 The optical allusions and illusions! The whole building hints at eye-care and eye-wear. Both the macro image and the micro image hint at care that reaches beyond store front to the people who need eye-care. With over 35% of the population having undergone facial enhancement surgery eye-care is an essential visual aid! 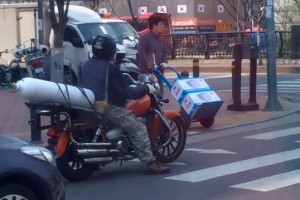 Delivering a cylinder of gas (for welding or medical use) on the back of a motor bike is like driving on a charged bullet. The old ways have not been marked by safety campaigns or political sensitivity. The bike is equipped for delivery of cylinders and this delivery service delivers 10-20 units a day. 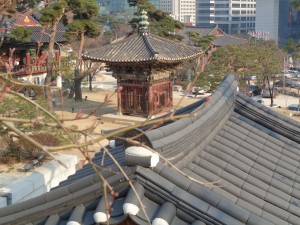 Somehow old and new merge in this city. There is respect for the old guard and fascination with the new. It is a bit like some of the other journeys we take. The old ways lay a foundation on which we grow the new. Hold on to the old ways too long and they impair growth. Forget them and ritual, mystery and the spiritual loses value.