There is a subtle difference between the perspective we might have on how we came to believe what we do (How we established the beliefs and values we have. Cosmogony) and the subtelty of the evolving physicality of the lives we live and the origins of that existence (Cosmology). The contrast between the ancient temple and the modern city addresses both origin and belief. It might be easy to say that the temple represents a belief system. It might be equally true that the high rise towers represent a belief system. The origin of those beliefs is about the cosmogony that has evolved. The temple has it’s beginning in the faith of people, in their living faithful lives. Being stewardly, loving the creation. Likewise the high rises have their roots in an economic faith turned with passive human frailty into imperialist action. Expropriation and exploitation. 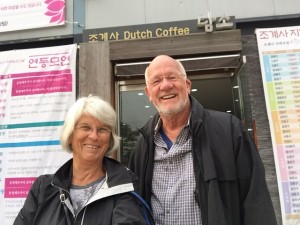 Walking the grit covered grounds of the temple site we land at the doorway of a coffee house. Yes it says “Dutch” and we are suddenly at home in a country where we don’t even recognize their 24 letter alphabet. A couple of Dutch kids grown up wandering the temple sites in Seoul. 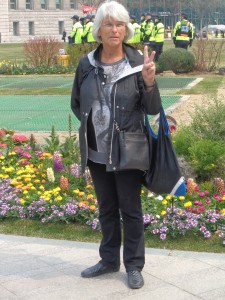 The origins of flower power are in revolt. The sixties and the peace symbols and the flowers and the police attempts at suppression are in this image. What is missing is 50 years. The changes brought about the world of hippies in the sixties were radical. The existing power structures were the enemy. Years later walking the streets of Seoul, that transition is institutionalized. The flowers are nursery grown and replanted to withstand the weather that mitigates against their survival. The police are supervising a rally where the protestors are seated in organized rows. The visitor waves a peace sign that in present Seoul says more about a wry sense of humour than victory. The times have changed. 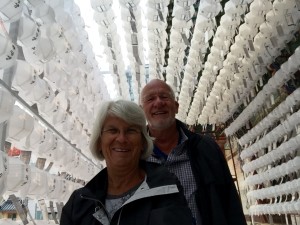 The body count after Vietnam… After the Korean War… After any day on earth is always significant. We walked through the tunnel of white lanterns remembering all those who dies. Each lantern carrying a name. We added new names because the stories of memory are a Resurection of the dead. 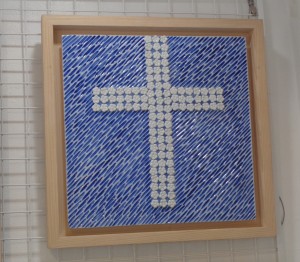 The ceramic art of Ajunggo is ceramic, is relief, is all created in blue and white. From tiny houses to vases, from platters to wall statements the artist collection in a private showing is striking. Using only two of the five colour Korean spectrum gives the work power. (The absence of red, yellow and black are notable)

Scale. One word summarizes much of our visit to Seoul. The relative size of things and the giant attention to what in western eyes might be irrelevant detail. The bear, brown, marks the entrance to an ice-cream parlour. No ice-cream in sight but every young woman lining up for a photograph with cuddles. In a low touch high tech culture contact is essential! The idea of using the bear, the scale of the bear, the location of the bear all present as counter-intuitive. If our friends at Nice Vice were to block the entrance to their Vancouver parlour we might think Chris has lost it! 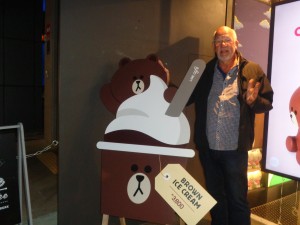 Yet when the price of scoops is flagged on a mini bear (3/4 my height) the scoops are dishing out! The cosmogony of of these images coming to life speaks volumes about desiring a sense of belonging. The cosmology of the stories of origin (36% Presbyterian, 8% Bhudist, and a whole lot of unattached) have a way of colouring a world that has emerged from repeated loss, repeated war, repeated victory, repeated creativity and repeated disruption. Stories of origin and stories of belief merge in daily living.