In a town where big was difficult and bigger was better the roaring ninties of majoilica production and hand-painted dinnerware carried the day. The oversized pots fired in oversized kilns by artists who had hopes and dreams for the rivival of their craft and art have them grace the gateway to town and the autostraada. 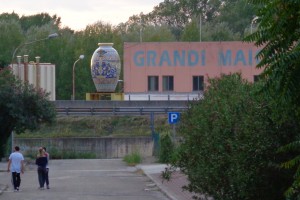 A tumble through history might put the past 100 years in context. The photos of grandfather Ubaldo Grazia taken in 1920 displays him throwing pots, applying bisque and firing glazes. 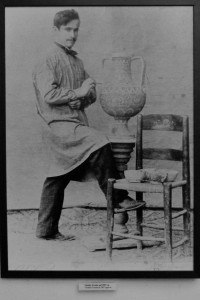 The family museum has samples of dual glazed items with items dating back to the family in the 1500’s. 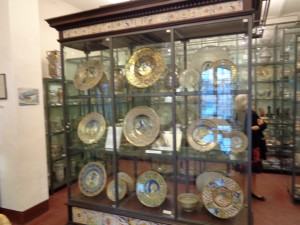 The family tradition is carried on in the facilities in the picture below. In 1990 I met Ubaldo Grazia and we maintained a viable commercial relationship till the industry veered in unusual directions. Formal dinnerware patterns evaporated from the domestic scene. The price of handpainted anything was undercut by lowercost labour areas. The traditional styles did not appeal to an emerging generation. Finally world economics focused consumer spending on cars and toys. In my conversation with Ubaldos’ daughter, Chiara, it became clear that many of the working factories have reverted to traditional forms and patterns, doing what they know best. Grazia continues to experiment with new designers and even exhibited works by an emerging artist from Perugia. 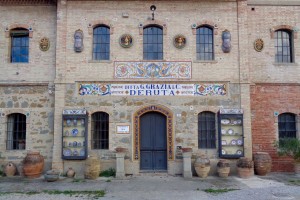 The process is one creating forms, firing them at 1050 C, coating them with a bisque and then decorating them with the pattern applying special mineral oxide based colours and then firing them again. The temperatures for this second firing are closely gaurded as they determine intensity, glaze integrity and minimize pitting 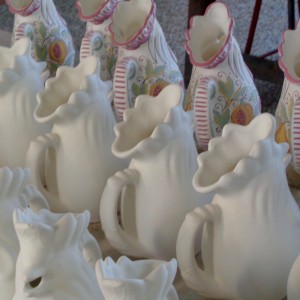 Applying pattern designs with a single or triple hair brush. 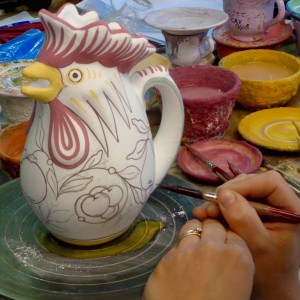 This entire village, from hilltop museum to cathedrals, from street art to factories all depends on a viable market for their product. In a world of disposable this becomes difficult. Somehow a town that has coloured beehives and ceramic tiles inset into their sidewalks desrves more than has-been status in history books. These artisans were labouring well into the evening decorating one vase, one plate, one icon at a time. The economics suck! So maybe museums will grow and in 20 years someone will ask whether anyone knows how to do this. 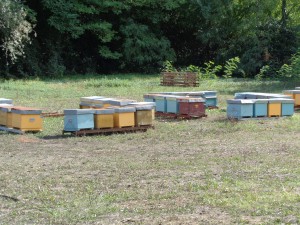