Two brightly painted garbage cans may seem an odd place to begin a few remarks about origins, however the ever rolling waves are burdened with litter that has molecules more complex than the water that buoys them to the beaches. Much of the rubble is plastics, did you notice the plastic bag full of unsorted garbage in the corner? The organics. The non-refundable bottles. The proliferation of non recycled plastics. All visible in the present in a way that the origin of the beauty on this island may be blurred by the abandoned polycarbons. 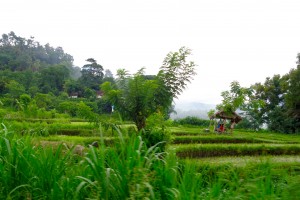 Terraced by tradition. When I look at the terraced rice paddies carved into jungle hillsides I marvel at their beauty. Their simplicity. Yet when I consider the damage to the original landscape that has been caused by these terraced fields, when I consider the genetic modifications made by farmers over decades of plant selection and breeding, then I know that my perspective is one that is rattled by the rate of change. I like the rice fields. I like the multiple garbage cans.

Flooded by intervention these fields yield the food necessary for living. The Indonesian rice dishes depend on the 8 basic varieties of rice. The flooding fields await the new season of planting. A perpetual crop. Food without preservation, dried by the sun and carved into jungle hillsides.

Bridged by roadways. The sculptured pillars mark the wallways of the bridge across the irrigation canal. A way to and from the fields. A way to cross a contemporary moat. 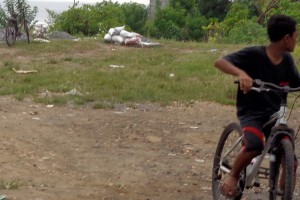 A beacon for the next generation. That boy and the old bycycle in the background will soon be replaced by a motor bike. A technology that has made public transit nearly impossible, Bikes that provide air flow and densification on the narrowest of roads. What is right and wrong, what works and what doesn’t may depend on your origin, your place of birth, your starting point. With the luxury of 1/3 world eyes it is easy to complain about the plastic garbage, but when 500 school children swept the beaches Friday morning I knew this was a lesson for me. This was their world and they were loking after it. Will I be able to go home and grow a few more plants, eat some local food and clean-up the beach heads of my wars with nature? The old yard light with a new bulb still works. Maybe recycling is about being satisfied with the light you have. 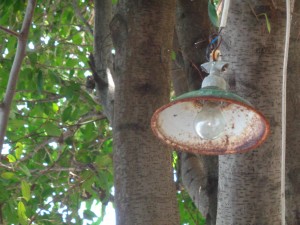