The celebration of a New Year — whether the Muslim Muharam, the Chinese Imlek or the Christian and secular Gregorian New Year, each celebration is marked by remembrance, cleansing, hope and consideration of others. The children in the title image just left the communal cleansing ceremony (the Melasti cleansing or first of the new year rituals) and Nyepi for them as for their families is a defined total community celebration. Parents, children, grandparents, servants and staff. Everyone respects the traditions of Nyepi. In Bali it is now island law. The Muslims, the Christians and the secular residents all join the Hindu majority in a respectful celebration of Nyepi (Day of Silence). This day falls on the day after the “dark moon” of the spring equinox. Visitors to Bali are welcome to join the ceremonies and festivities, however law requires everyone to participate in the day of seclusion. The day of silence! 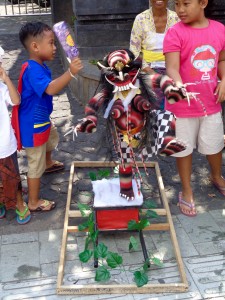 The Ogha Ogha that the two young boys are carrying with them illustrates the family involvement. From Cleansing Ceremony to Ogha Ogha burning children are part of the celebration. (Bhuta Yajna Ritual: Performed on the day before the New Year starts, this ritual is observed to get rid of evil, to win over Batara Kala by the Pecauruan offering, and to maintain the balance of Nature, mankind and God). On Nyepi day, they like adults adhere to four basic seclusion any acts. First there is no fire or light permitted. (Amati Geni) Second there is no work permitted. (Amati Karya) Third there is no leaving the house/hotel. (Amati Lelungan) Fourth there is no amusement or delight permitted. (Amati Lelanguan). Hotels find some exemption, however all the streets are closed as are the beaches and guests are required to remain on the property and primarily indoors, television does not broadcast and no stores are open, all honouring the intent of the silence. The fourth ritual of the Balinese celebration is Yoga/Brata after Nyepi when the devout Balinese Hindus practice meditation. And the fifth event that highlights the week of celebration is the ninth step (You must be kidding) or Ngembak Agni/Labuh Brata this opening ritual of the Balinese New Year involves forgiving each other. And finally the celebrations are concluded with the
Dharma Shanti to mark the closure of this sacred week of the Saka Calendar. 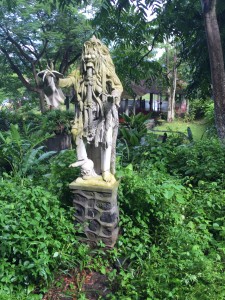 The place of figure headed gods is an important part of Hindu ritual and central to the ceremonies of cleansing, devotion and forgiveness of each other. 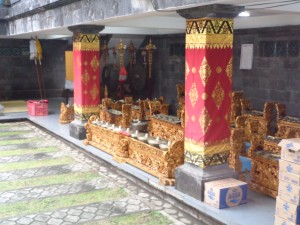 Such celebration demands massive preparation, all deity images are dressed (skirted) all temples adorned with fabric, pendants, bamboo wreaths and the offerings of the people. Before midnight on the eve of Nyepi all the adornments and decorations are cleaned up so that the entire community looks like no one is living there. The darkness on the day of silence augments the sense of abandonment thereby improving the success of victory over the evil spirits leaving the island never to return as there is no one around to inhabit. There are wonderful parallel stories in Christian literature about more evil spirits returning to inhabit the newly redeemed. In recovery one might want to examine the pink cloud references and see that all persons who have been redeemed are vulnerable to evil visitation without rigorous devotion. 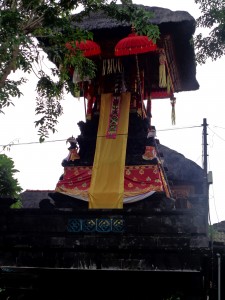 One thought on “Nyepi — A Communal Celebration of Silence”