Inside the old castle at Loule, Margaret captures a historical setting to remind me that she is retired.  The really great thing about a retired partner is that she can be drafted!  She no longer sits behind a desk, but rather corrects spelling errors for me, reads with her book club, pulls weeds from gardens and works with her step group.  Retirement is a change of work.  The minaret, built in the 13th century, of the mosque in Loule was converted to a bell tower and the site became a Christian church in the 17th century.

The old castle had more surprises, but most valuable was the vista of the entire village. 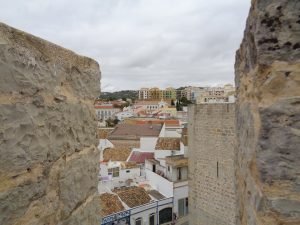 Inside the historical fortress is also a museum of unearthed artifacts.  The water urn dated around the 13th century speaks of scale and occupation.  The south of Portugal was important to most invading powers.  What remains is a carved into hillsides community that is connected to the sea by fish and fishing.  What remains are gardeners with green thumbs.  What remains are tree farmers who grow Oranges, Limes, Lemons, Pommegranates, Olives, Cork and Marmelos. Crops grow when people have hope for tomorrow. 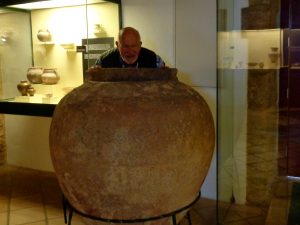