The multiple sewing machines set in a grid speak like Sister Carrita hinted. The multiple images are more powerful than any single image. In the sixties this was a break with tradition.  Redundancy was out.  Even AA stalwart Bill Wilson tried avoid linguistic duplication to make his message more powerful. The truth that became evident over time, was that multiple images gave rise to powerful messages.  The sweat shop sewing machines hint at an era that we hope has gone by.  Sadly, there are many women and children attached to the treddle of these machines.  I remember rebuilding one as novelty. 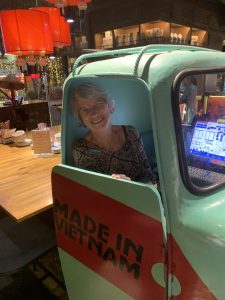 In the cab of a truck body in the Di Mai restaurant in Ho Chi Minh City, Margaret takes control of the menu, cash and phones.  Almost familiar for a retiree! 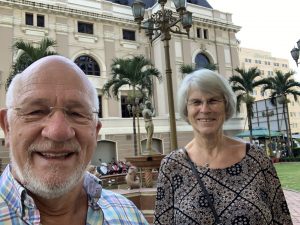 On the side of the Opera house we pose near the fountain of music!  And as one might imagine, we age as we wander!  The images of history are landmarks on the way! 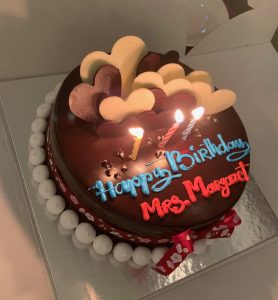 One thought on “Made in Vietnam”