In all the guide books and web sites that nudge visitors to explore Brussels there is one entry that tops the list — Manneken Pis. Yes, a statue of a boy urinating in a fountain. We digress. First the Pipe! We walked through the Magritte Museum and were drawn into a confrontation with normal perception and through that into a reformation of our thinking.
The well known post-card is the beginning of an openmindedness necessary to understand inclusiveness. 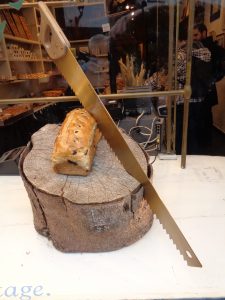 A few steps down the street a window display caught my eye. Yes I grew up working in a bakery, so sliced bread was not driven by a truck-loggers metaphor. The hand saw cutting into the loaf of fresh bread, that was placed caringly on the chopping block, was more than metaphor. It was a change of perspective. The slicing was more important than the bread. Eating may be more important than the guest list. 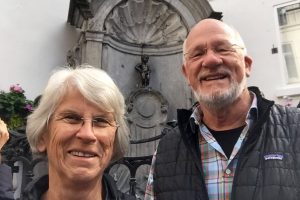 We made it to the number one attraction and as the selfie demonstrates, we pushed our way through the crowd and got close enough to capture us at the fountain sharing the vigour of a youthful figure performing a full-streamed discharge. Now all that might be interesting if you are intrigued by the novel, but this statue was drawing crowds. Crowds larger than were in the churches this morning.

To capture the disproportionate attention a peeing statue can garner, one may need to dig into history and see how offensive genital parts were to the masses at the turn of the century. They even called it Victorian Prudism. The twisted irony is that the impressionist painters and the arts community were poking fun at this prudery. The artists laughed as they created the statue — the ordinary folk streamed to see what was happening. This was not a statue peeing. This was once again an artistic protest. This was why Luther was right. The status-quo and the conservative establishment can not be held as legitimate by the confines and errors of tradition. Reformation was about changing relationships, changing ideas and resetting values — not theology.

On the easel, this 1967 painting by Magritte. The conflict between background and foreground are gone. The distinctions between Jew and Gentile, Clean and Unclean, Male and Female, Gay and Straight, Addicted or Recovering, Youth or Adult — distinctions that have plagued the world since the earliest creation myths and have repeatedly been reconciled by artists. This is not a discussion about a pipe, rather all conversations are about invitation into community.

Magritte saw through the veneer of respectability and declared visually that what you see is your inculcated fear, what you get is freedom!