The 1941 photograph captures the Frank family in winter woollens. The picture reminds me of those early immigrant photos taken in the late 1940’s and early 1950’s. Walking through the Anne Frank House some 20 years after my first visit I was reminded more starkly that all this took place in the middle of a war. A family struggling to survive. A father hiding them as best he could and a diary.

The self-awareness and levels of emotional honesty contained in the diary was teenage real. Whoopi Goldberg said, “What makes this kid believable is her self honesty, her messy room!” That a real person is drawn by detail into our present memory is the mnemonic gift. We stood just over a week ago at the Vimy Memorial in France and the mud-coated trenches were postcards for memory. This story, this hiding place, this memorial was about dislocation, disconnection, and distrust.

The betrayal of war and the inhumanity of racism were present in one place. As an immigrant kid growing up in Canada, I understood the dislocation — the leaving Holland and learning a new language and living in a new culture. In the stories my father never told, but my mother hinted at, I learned to understand the levels of betrayal and mistrust of war. In their compassion for the stranger, the refugee, the unemployed, the marginalized I learned to care, I learned to attend the Cenotaph every November 11 and I learned to celebrate differences.

Standing on a street, next to a canal in Amsterdam in Otober was cold, was lonely, was like forever and yet as an aid to memory the twenty minutes prepared me for a voyeuristic look at a lost life. On the American penny it says, “Et pluribus unum.” (One of many) This story is one of many and maybe we will learn the lesson that every penny is important. 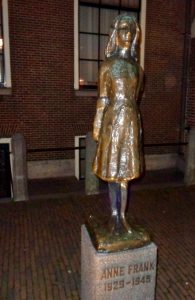 A statue in the churchyard simply lets us know that she was born and that she dies at age 16 of typhus in Bergen-Belsen. She is one of many children that died because of hatred.

Then a few kilometeres across town on the exterior of the Niuewe Kerk an invitation to visit an exhibit dedicated to Ghandi, King and Mandela was waving at us. 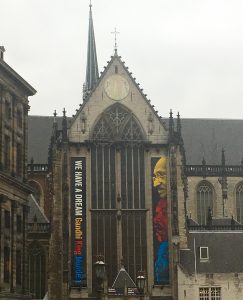