The hellish terror of a volcanic erruption, with time, created the landforms left by erosion. In the cosmic scheme of things that might be insignificant but in the region of Cappadocia and especially in the Goreme Open Air Museum and the other designated heritage sites there is a story. In the region there are some 400 identified and possibly as many as 800 under and in ground churches. The number is staggering and exploring them more so. The ceiling of one such carved into the rock church is below, complete with fresco still in tact. A brief history. The caves and houses in these hills were first occupied by the Hittites in around 1200 BCE and in 100-300 ACE were further excavated and occupied by early Christians seeking to hide from Roman persecution. Many of the domes housed monastaries of 40-50 adherents, both monks and nuns. Other units housed family and extended family units. Now to capture the sense of a house church, these units contained their own church with dome, columns, altar and frescos or carvings. The sixties language for home churches was not adequate. These were homes with cave carved churches. The labour to create the homes, the passageways and the ventilation, cooking and living spaces and systems were impressive considering that much of it was built by hand right at the turn of the century. The Christians hiding from the Romans found the valley safe and inhospitable to the invaders. The carved into caves residences and places of worship made access by soldiers very difficult. The details can be seen in the ceiling illustration. 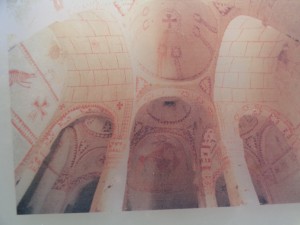 Structures had many of the features that became prevalent in the early churches. 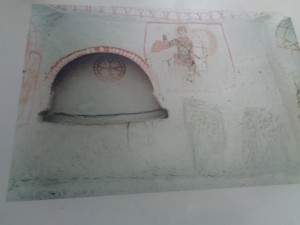 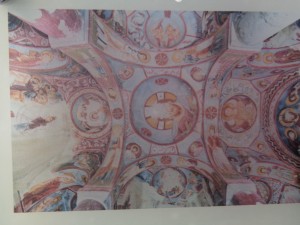 The most hopeful site was a church that was a shared church and mosque from 300-1100 ACE. Note the church spire topped by a minaret. Inside Margaret is seen in both the altar front and the Imams’ pulpit. This community shared worship facilities and lived as a glimpse of what copuld be. 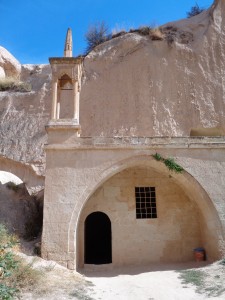 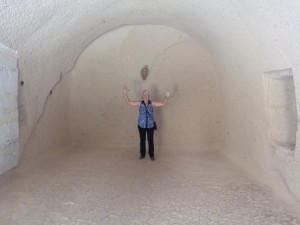 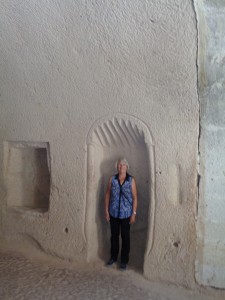 Now you knew the Last Supper was going to come back. At the long table below 40 or fifty adherents would eat a common meal. The fresco at the end of the table is an early capture of the Last Supper. 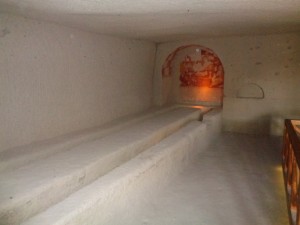 After a few days of wandering around this monument to faith, this valley that captures human capacity to create and build spaces for living and worship, for animals and people, for safety and sustained food supply it became clear that this was holy ground. Walking and at sometimes crawling through underground cities that went four and sometime eight stories underground it became clear that this was a community. One five kilometer tunnel linked two undeground cities. The effort, energy, commitment and tenacity that went into creation of these spaces was significant. In the third century with the conversion of the empire Christianity became legal and these cave houses, monastaries and churches continued to function and flourish. In the 1970’s preservation works started in earnest and many remaining families were relocated.