The 1972 coloured painting hints at Escher and a Rainbow.  The painting is the work of Hawaiian artist, Jerry Okimoto.  Okimoto moved to New York shortly after producing this waving colour magnet.  He died in New York in 1998.  Now all of this might just be a way of drawing you into a discussion of art, but in the Muesum of Art in Honolulu there were more chapters of this story. The mask from Bali Indonesia may be just another prop in a Topeng play, but it too is an invitation. 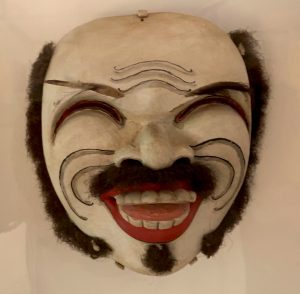 The mask of Sidakarya Putih appears at several places in a play as a victor over evil.  The mask appears at the end of most plays in Indonesian theatre as an assurance that good will conquer evil. The mask speaks of hope.  Initially we were drawn to the Hawaiian Museum of Art to see the Islamic collection at the Shangri-la.  After four hours we stood in this museum at the crossroads of east and west, in the shadow of cultures and entered into a new serenity, a renewed Shanghai-la. 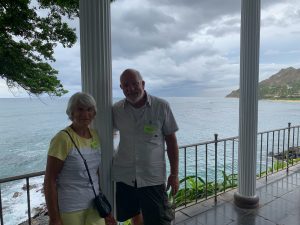 Our kids called it brown-face, but we have learned much more!!