On the streets of Ho Chi Minh city motorized bikes carried cargo and people without regard for lights and law.  Each ride a practical defiance to economic impossibility. The roar of flower power gone wild.  The roar of celebration gone home.  The roar of the noises and horn clamouring streets.  All culminating in a cacophony of presence.  We were here.  In a city that has survived years of war and revoloution, survived the French and the Americans. A city with great French bakeries and American hotels.  A city of flowers and global powers.  Along the walkways recovered from covered canals the lights of a lunar New Year add sparkle to what could be dim.  With all the visitors we pose between pigs to celebrate the New Year. 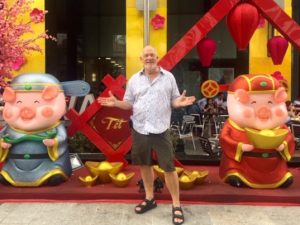 The pork dishes and cartoon images have become a post-television celebration.  Children enacting screen images and teenagers inserting themselves into Instagram streams.  There is an attachment to popular culture that I do not understand… Maybe, am too old to savour. 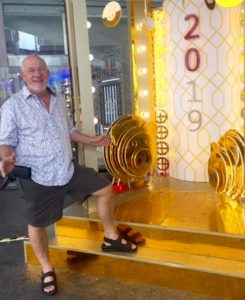 A few blocks further and the sixth tallest building in the world celebrates 2019 with gold-coined pigs.  The contrasts between the images around the old Buddhist temple and the temples of mammon are striking.  The similarity is in the ability of the people to recover.  Tomorrow we’ll visit the Thien Hau Temple.

One thought on “Flowers, New Year and Motor Bikes”