In the Salamanaca square — a monument.  You may have noticed that I am not prone to vainly image monuments.  This monument, with pipes was more than a bronze. Dedicated by the University of Salamanca to Salinas.   This was my childhood.

I remember getting paid a penny for every wood screw we removed from a pipe-chest so my father and our boarder at the time, Hugo Spilker, could replace the aged leather in the chest.  Pipe organs were their hobby.  Rescued from perdition in funeral homes and restored to new-world grandeur in immigrant churches with all the ranks necessary for communal singing.  A generation later imported French and German organs and parts and then complete tracker organs… But I digress.  This monument to one of the great music teachers in Spain returned memory to those early music lessons… Those failed learnings.  The keyboard in the chapel is barely three octaves long and is an early linkage to what was to become the Tracker Organ. Above the keyboard there is no music holder!  Salinas never used one as he was blind.  Next to the Cathedral Nueva was of-course the old church.  In the old church the the uni-body construction organ was also diminished by the ceilings, altars and pulpits.

Somewhere along the way culture, like tastes, changed.  Tourists still grovel for a picture of a young woman dancing Flamingo but hardly anyone listens to a pipe organ.  OK Emerson Lake and Palmer did!  But then hardly anyone sings hymns!  Eventually someone will see (ok hear) what they are missing.  Blindness may be healed. Tourists were taking pictures of statues and organs.  Maybe next year they will….. 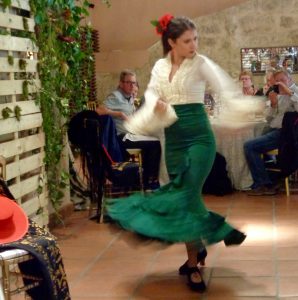