The World Court held sesion in the chamber known as number 600 located behind those four windows in the centre block, however the spectators and journalists occupied the entire floor. To settle a World War, make straight what was crooked, smooth out the rough places, will all take more than a court session or two. An almighty dose of peace would need to ascend from that upper chamber to begin this restoring business. 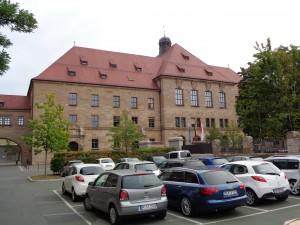 The size of the Zeppelinfeld and the entrance towers and the reviewing stand all bear witness to some grandiose view of redemption by human might. When Adolf mounted the reviewing stand, the diminutive profile commanded adulation. His presence became a symbol of hope for the young and under and unemployed. They migrated from the corners of the Republic and the capitals of Europe to participate in the promises. Food, work, glory, hope, world domination. History, the courts and many personal stories have highlighted the atrocities and the futility of the War. 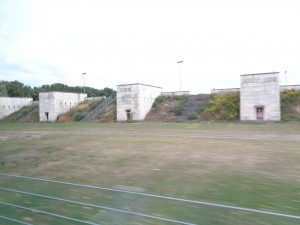 The most graphic reminder of all that brokeness is captured in a the black and white image I found in the archives at the Documentation Centre in Nuremberg. The millions of Jewish people that were transported to an early death, (See movies like Schindlers List) or the millions of gay persons banded for execution (See a stage play called “Bent”) or even the millions of soldiers and ordinary folk whose lives were forever cut short or altered by the events — all require compassion and undersatnding. My father never spoke of the war till the last years of his life. I walked through the Documentation Centre trying to understand. Pieces of paper can not die. They don’t bleed, they don’t cry.

The knocking at Europe’s door of both refugees and migrants is a bit reminiscent and foreshadowing of a people chasing food, drink, shelter from the bullets. The grandstanding of political aspirants and their pledge to help is as empty as that of a Pope whose denominational wealth alone could solve this crisis. When I hear of no help from the Saudis and no help from Egypt and no help from the other neighbours I am reminded of the begining of the WWII. What we are witnessing and are about to witness on an even grander scale is globalization of demand. The dislocated in Syria, joined by the disaffected in Afghanastan, Iran and Iraq are all looking for a home. They are migrating in ways not disimilair from our early fifties ancestors. They are arriving at some promised land with nothing, believing there is a better way of life. They are right. The question for us is whether we are willing to share our abundance or our bullets?

One thought on “Migrants, Court Room 600 and Nuremberg”