The ancient angel, Nike, that hovers over the entrance gates to the polis of Ephesus strikes more than a guarded entrance. This is a winged welcome to those who have travelled and earned the rank and right to enter. Those who qualified by rank, skill, and social standing as Nicolatians. Those who John spurns in Revelations.

For the graphics lovers the Nike (yes running shoes) swoosh can be seen by looking at the knot on the robe belt and following the pointed fold to the swirl at the hem line. Now if that is all you remember of Ephesus than you are doing well. The details of the centuries of Governors and Caesars and other Romans and Greeks are carved into marble and granite at every fallen column in the ancient ruins of the city of Ephesus.

When our Muslim guide explained the referrences to the seven churches in the Book of Revelation with empathy, insight and understanding I was humbled. When she searched the internet for the original texts and read them as we wandered I learned. My eyes were opened. I was entering into a Revelation

The gate leads to more of the trading halls of the city. The seven cities that John refers to in the introduction to the book of Revelations were all within two days journey of each other. With Philidelphia at the juncture of the trading routes it was celebrated for being at the “cross” road between the sea and the inland. As the names of young women were carved into marble pillars in the pagan temples, so, John notes, shall your name be carved into the pillars of Gods’ temple. 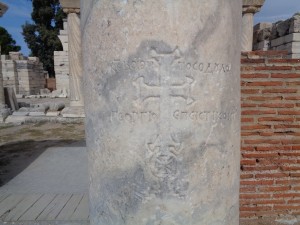 There is this wonderful twist in the reading of the “fake jews” text that John referrences in his complaint against the residents of Smyrna. The focus on the outer court and the Narthex of the church where souls could dance for years trying to gain admission. Some of the archeological findings around the Narthex may point toward the later concept of purgatory. This transition to gaining the crown of life was often confused with the idea of gaining the support of the “crown” of Rome. 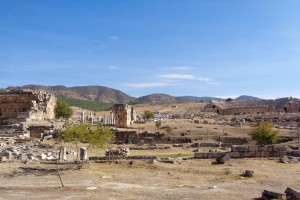 The most startling physical observation that was pointed out to me was the notion of the Laodiceans being lukewarm. A few kilometeres to the north east is the city of Hierapolis. There we find the world heritage site that houses the most significant hot springs in the anciemt world. The water was steaming hot and the city hosted the largest Roman baths in the empire. To the south of Laodicea were the mountains caped in glatial ice and snow. Laodicea was neither hot nor cold.

The other image of lukewarm comes from the progression of the hot spring water as it cascades through the pools becoming lukewarm and “value less” in the empire. Eating and drinking with a God who can come and go like hot springs. A God entering into lives with the constant invitation to “sit with me”, the invitation of honour in the Roman Bath.

In listening to our guide who loved both the archeology and the scriptures it became clear that much of what I had learned to theologize was in fact physical reality. These were real cities, these were persecuted persons, these were difficult times. There was hidden manna. The crushed marble a manna of story. The grave marker for St John in the largest church built in asia-minor was a solid granite foundation. The irony is that most of his bones were stolen by the Vatican and his arm rsts in Istanbul. Somehow if you trace all the claims there are enough parts for a few saints! 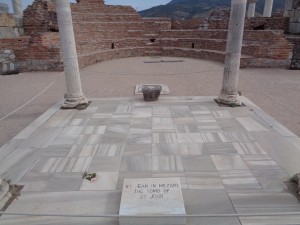 There is a subtext to the story of John and the churches. John was assigned to look after the mother of Jesus and a short distance from the centre of Ephesus there is a chapel that marks the site where John cared for her. The chapel is revered by Christians and Muslims. Now all this detail may be a bit tedious, but I learned again and again to be open-minded. The historical details connected me to a real story that was not as abstract as church and theology spin it.

A realitic sense of past, enjoying the present and living with hope for the future is the way to happiness. Visiting history creates a solid foundation. A gateway to the present.