If one were to look closely at the face as it moves toward the black granite walkway, worry would be appropriate. In motion the dancer is more elegant and visibly safer. Landing in Rome after a few hours and flights the evening entertainment is more than a crowd pleaser, more than a flash of fitness, more than a break in a good walk — the dancer is an invitation to all that makes travel exciting, entertaining and educational. The stop action of the camera exposes excitement, the crowd cheers with entertainment and the learning will come later. Much later in some lessons. 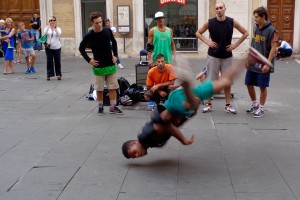 The headless persons in coloured costumes drive my Sunday afternoon thinking toward that passage in Revelations that hints at the coloured directionless horsemen, a story itself apocalyptically worth a read. The headless horseman motive exists in much of European folklore and is included in the Brothers Grimm stories as the headless man sitting on a grey horse. The headless martyred saints might be appropriate today considering our Syrian sisters and brothers. The street theatre paused long enough to insert Margaret into the line-up! Amazing things happen. She clearly has her head about her!

Overtime weddings have transitioned from sacred pledges of comittment to street art. The bride climbing the 124 steps of the historical Santa Maria In Aracoeli church climbs indulgent to the altar. This church built on the site of the ancient Roman capital was once a pagan temple and later transformed into a church dedicated to the Madonna. Pop culture has a way of bringing history full circle. The picture captures the irony but misses out on family and friends. 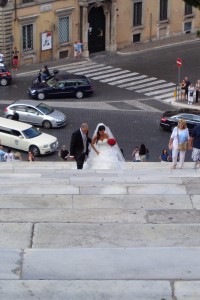 The spectator imprint is carved on the faces searching for photo-ops. A nation after seventy years still holding on to the “No More War” pledge. When you walk the streets of your town, city, neighbourhood will people see the future, live with hope, watch the building of a new way to live and see the street with eyes wide open and accepting the past as lessons to be learned and enjoying the present so that the future may be filled with hope. 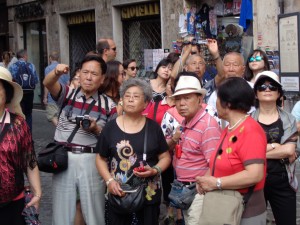