The inverted trunks margin the entranceway to a house that our local friend called “Hollywood-too-much” in a neighbourhood of mansions lining the way to the hilltop of Perugia. We went to see the underground city, the entire city on top of which the current (14th century) city was built. Dates get a little bragadocious, with each hilltop claiming prime status. It’s a bit like claiming to be the oldest living person in a seniors home. We entered the wallways of the underground and to the relief of my climbing leg muscles there were escalaters climbing us through 97 steps of the underground city ruins till we emerged above ground.

Emerging through a wallway into the new town square.

There the fountain of fountains, the church of churches and the police station of police stations. Each deadend by the spartan block construction. Each built on a secret city below. 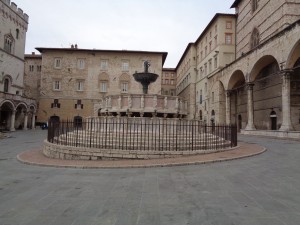 Yet above ground the Peruvian Christians casme to visit to seek support from their sister city, their namesake, for the suffering natives in Peru. A moment of solidarity and migrant dislocation. 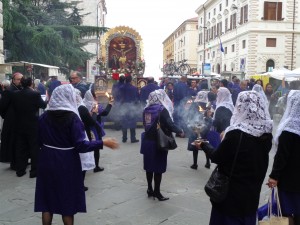 Yet when seen at a distance, from a perspective of time, Perugia was the central city of the region and still serves as capital. A rooted place of direction with its own underground, its own suffering family.

A place were we paused for coffee at 8:30 and savoured the smoothest cappuccino in 31 days. Who’s counting? Who keeps score? 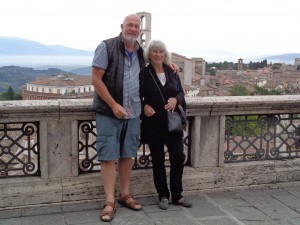