The Tretyakov Galleries are a monument to Russian art and a monument to Tretyakov, a patron of the arts. In his life-time Tretyakov collected 2000 works of Russian art and donated them and the gallery to the State so people could enjoy Russian art. The collection now contains over 130,000 exhibits. All of this might be really dull if it weren’t for three paintings. (Not to say any others weren’t significant, but these three stand out for distinct reasons.). The feature image of this blog is from a painting by Vasily Surikov. This work entitled, “The Morning of the Streltsy Execution” produced in 1881 captures the failed uprising by Streltsy against the walls of the Kremlin. This realistic painting captures the oblivious observers and the paired finger supporters. Streltsy dies after exile to Siberia. Art has a way of capturing both detachment and engagement. The lines were carved into the landscape by sled rails. The peasant uprisings into the human condition of their peers continued until the Bolshevik Revoloution.

A simple painters pallet may disclose colours and derivative colours but the paintings capture everything behind the brush. The introduction of European painterly manners into Russia created an art reservoir that proclaimed liberation for the poor. Colour for drab lives. 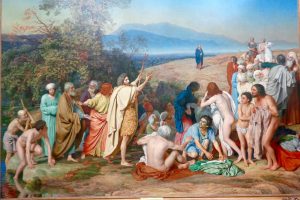 Alexander Ivanov in 1857 painted this, “Appearance of Christ Before the People.” It is one of the very few religious paintings emerging from Russia in the period. The Christ that appears in the desert before the people is devoid of historical connection, devoid of tradition and disconnected from community. There was a sense of abandonment by the church as it continued to disconnect from the Greek Orthodox branch and with time merged as the Russian Orthodox Church. The poor remained disenfranchised. The much older tradition of Icon art in Russia was completely other. It was redemption centered. It spoke healing to the hurting. 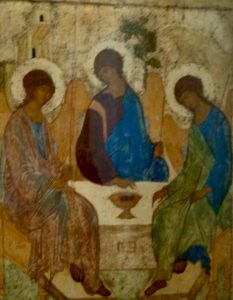 The Icon by Andrey Rublev entitled “The Trinity” captures both the circles of feasting and fasting as well as the Trinitarian triangles. Icons were multi-layered dimensionless representations of sacred images. Yet in the Icon one could see the poster art of the CCCP of the Soviet Union. The art of the Russian people was initially influenced by an Asian church and later by the over affluence of Europe. Neither delivering redemption from everyday misery — each abandoning a people to revolutionary change.