In the St Nicholas Cathedral in Amstredam the left chapel features this painting by Hansa Versteeg.   The clouded staircase behind the image hints at hierarchy, violence, and war… How the powerful sacrifice humans for their purposes.  The painting, “Pieta della Nostra Terra” has a Ukranian flag appended in the church for “greater clarity.”  The juxtaposition of this rending of the Pieta with the original by Michaelangelo raises all the questions about sacrifice and war.  Mothers lose.

In the city the canals weave between paths and buildings.  A serenity missed on occasions. 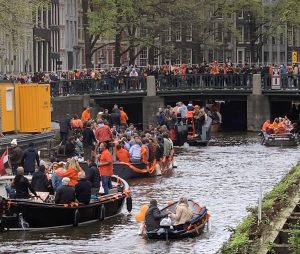 The celebration of Kings Day with all its orange glory and triumphal sailing through the canals is devoid of the story told in the resistance museum.  A king in exile. In a few days the Dutch will celebrate liberation day.  The stories of bravery, leadership, resistance all merge into the current affairs in Ukraine.  Starvation and hardship marked the last years of the Second World War. 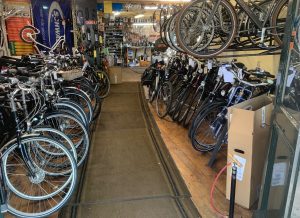 An independent reliance on bicycles coupled with an Eco awareness may emerge as a redeemer for these lowlands.  Versteeg may have captured in a few brush strokes the love that redeems this world, the world.