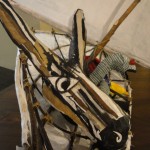 On a church readograph in Sault Ste Marie there was this text,”Why didn’t Noah swat two mosquitoes?” The absence of the miniature vampires from the earth would sure make camping a lot more relaxed. The sign was somewhat obliterated from memory till I wandered into a church in Quebec City and saw the remnants of a children’s Noah’s Ark installation. That donkey was too good to swat off the boat, besides all those years later the teacher was going to need something to ride on. An exit strategy!

Walking through another church I saw this old pipe organ. A symphony for one! Now in the early seventies Emerson Lake and Palmer released an album featuring pipe organ tracks woven into their rock tunes. The church organ in the picture was a good 200 years ahead of the musical currents. I have friends who would plead for heavy metal to make an appearance in church, I have other friends who would advocate Gregorian Chant. The right exit note is excellence. 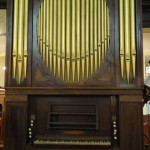 A few paces down the street I saw this foot wide exit stair-case crumbling off the side of an apartment building. I was reminded of the church ceiling, this looking up at a gold-leaf layered ceiling admiring craft and opulence in the same sentence. I knew there was a connection between two unnecessary mosquitoes that Noah kept on the ark, a donkey in a kids story, a pipe organ and a church ceiling. Each one when unplugged from their context is annoying or stylized or childish or garish but when placed in the context of renewed living — living and enjoying life — each is a gift, now i’m clear on all of them except the mosquito and I have a few weeks to work on that one! Their exit does need some work… but then no exit strategy is perfect. 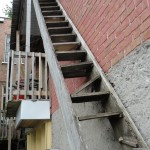 One thought on “Pipe Organs, the Ceiling of Heaven and Exits”