Rock formations emerge from the Atlantic Ocean as a reminder that this was the end of the flat world.  After here, oceans that poured over the ends of the earth and then down into the nether regions.  The waters under the earth!  The rolling waves of the ocean have eroded these cliffs from before the beginning of time.  The colours, shapes, vegetation and viewpoint stage the scenes for the delight of our eyes. 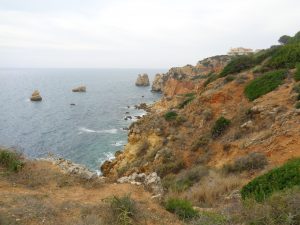 Standing on the cliffs, unencumbered by safety rails, a vista of permanence and erosion. Common sense might need to prevail.  Safety can never be regulated.  Regulations that tend to mask stupidity are stupid regulations. So much of each visual feast available in North America is so often obscured by the do-good intentions of helicopter parents or helicopter governments — hovering so close that we can neither hear nor see the beauty. 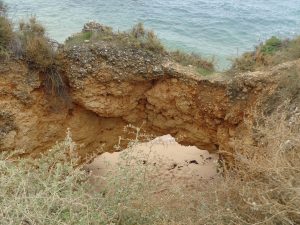 There, a water washed tunnel bridged by a walking path. We spent an afternoon savouring forms and  tracing waterways.  The ways water carved shapes in stone. 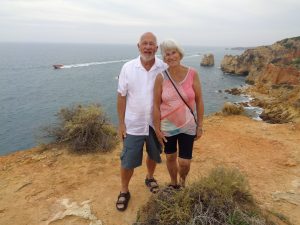 On foot we stand overlooking the cliffs above Atlantic.  Back to the marina in our “Tuk-Tuk” to see what condos, boats and recreation can often do to obscure beauty. Sometimes a flat earth theory might be more supportive of climate change.  For just a moment we could push all the clutter over the cliff and then return to the thrills we are attracted to. 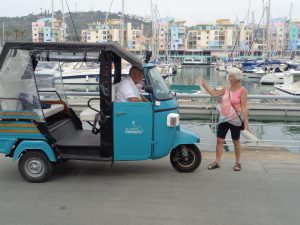