On discovering the Temple mounted near Mount Parnassus in Delphi it would be easy to marvel.  A hand hewn temple with inner and outer courtyards surrounded by offering vaults.  A place of power seeking to lord it over everyone. The mountain was sacred to Apollo and was home to the Muses and Corycian nymphs.  The mountain was the “origin” or home of poetry, music and philosophical learning. 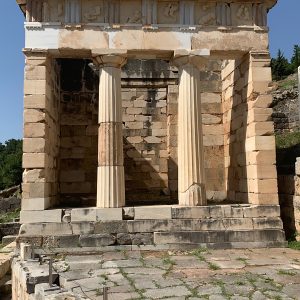 The vaults for storing future offerings for good outcomes.  A few good words from the priestess at Delphi could foreshadow the swing of the tides of battles and oceans.  To question the wisdom of the oracle was blasphemy.  The oracle became more infallible as time and wars continued.  The secure vaults housed the offerings for the sessions.

The oracles of Delphi have been a scholarly mystery, a shrouded tale, and yet the fountain of decision making.  To be an oracle originally required the Pythia to be a young virgin.  Subsequent misuse and abuse ushered in a requirement that the women were over fifty with no links to husbands, children or any previous life. The oracle was responsive to questions on the seventh day of the seven warmest months of the year.  The oracles’ answers were often plain-spoken by a priest, however the ambiguity led to the remarkable synchronicity of the responses.  Soon the oracle sat at the Centre of Delphi and Delphi at the Centre of civilization.

Perched to bless the seekers at Delphi, the oracle, in the words of that cryptic Greek, Heraclitus, spoke for the gods  “The lord whose oracle is in Delphi, neither speaks out nor conceals, but gives a sign.”  May this be a sign!