The keyboard on the sidewalk next to the möbius bench, shading the spiralling lamp-standard waits for your fingers to lever the ivory into music.  The invitation more powerful than a stop sign. The sections of pex pipe turned into a cloud by Ricardo Nube at the Museum De Art Contemporano was more than a talking point.  It was the waterless cloud. In a city without measurable rainfall water is more than metaphor. 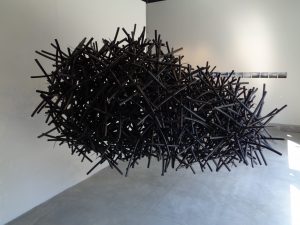 Across the courtyard the images of the Peruvian counterculture that emerged from 1983 to 1992 featured metal musical threads that provided a great sequay to the current counter cultural work of the Dutch artist Gam Klutier.  Many of the images were cosmic and historically linear but as is clear in the image below, Klutier steps beyond the grotesques of the poet Lucebert and delivers images that demand attention. 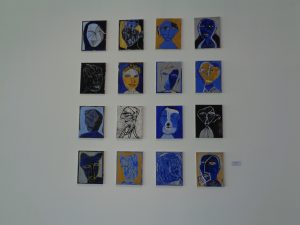 Just to keep the world real, outside on the streets in Barranca a community on the edges of Lima, an image as timeless as every rebellion and as counter cultural as the internal combustion engine.  Cars are valued because they are valuable. There is something very twisted about the value of ordinary things in a culture where the disposable is vogue. 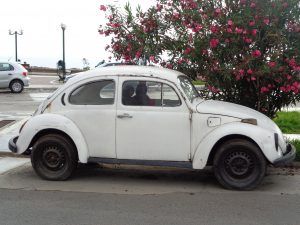