Tangled in the heavens between poles and buildings are the wires.  A cacophony of telephony and power wires strung from source to wherever and abandoned as required or necessitated by regulation or bill-collector. Clustered wires abandoned as a digital communication replaces land lines.  Here, like elsewhere in the world, people want to be connected without a leash.  Recycled copper has not reached pirate-salvage values and when it does all this tangled web may vanish into recycling bins. 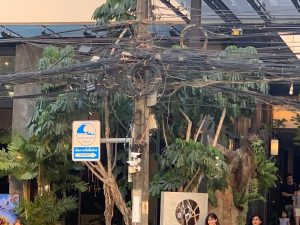 One, on first viewing, might express (or at least internalize) an extreme sense of deprecation for this country, or for that matter for most emerging economies. Each person wants to be connected to every other person and cell phones could replace every grain of sand on the beach in this resort town.  Imagine walking to water or even on water stepping from phone to phone. No more sand between your toes, just selfies and sunsets.  Keeping up with a wired generation is difficult and made more difficult by the liquid wiring of the caffeine peddlars.  The candid shot below captures the wiring of the neighbourhood, the wiring of the caffeine addicted and the wiring of the emerging sea goddess.  All our gods in one frame.

One thought on “Wired Wireless”