Riding in a yellow taxi from the old docks to the city Centre, the driver tried explain his unified God perspective and suggested we consider the possibility that in some Greek Orthodox  circles the ancient Gods were considered as manifestations of the trinity and Zeus was the Spirit.  None of this might matter except the faith of the cab driver told the story with compassion and compulsion.  We had seen the church at Kapnikarea (one of the oldest in Athens +/- 1050 AD) and knew that its foundation was likely an ancient temple.  The cabbies story had foundational roots and satisfied the need to integrate the marbled real with his real faith. 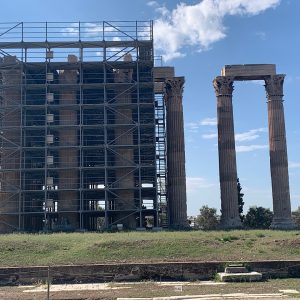 The scaffolding around the marble columns and the standing columns with their lego joining block are a small part of the original temple of Zeus in Athens.  Zeus was considered the daddy of all gods.  Yet Zeus is the god of the sky in much of Greek mythology and the coupling of that image with the often bearded elder image creates a credulity gap.  However when Zeus is considered along with the images of lightning and eagles then a spirited bit of wisdom emerges. 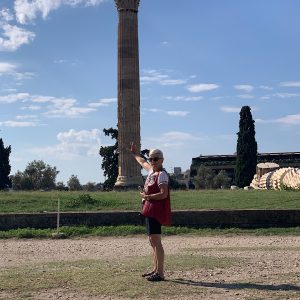 The reconstruction of the ancient temple has been in progress for years and with Margaret’s support will assist in straightening the column.  However the simple Greek pleasures are not diminutive to the gods.  In groves and plateaus the stately olive grows.  The trees re evidence to an ancient civilization, a caretaking world where trees are valued into the next generation.  Maybe there is a spirited olive tree that will be home for tired eagles. 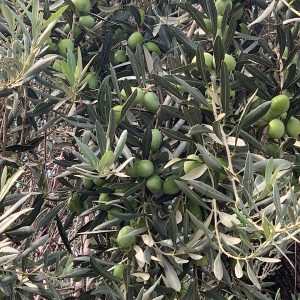