From the top down these were wind-swept, water-worn, time-born formations that from the foundations of the world were stacked for visual delight.  Formations that demarked the end of the earth as we knew it.  Formations that announced a new frontier. From Albufeira to Lagos and on to Sagres this coast-line was a cornucopia of beaches and cliffs.  Each laid out as both visual feast and the dancing-sands of delight. 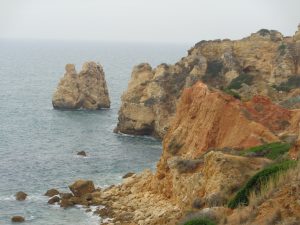 A castle in the sea.  The last major earthquake in 1755 on All Saints Day shattered the city walls around Lagos rattling acres of land into the ocean and leaving cliffs with cross sections that expose human presence and geological history. 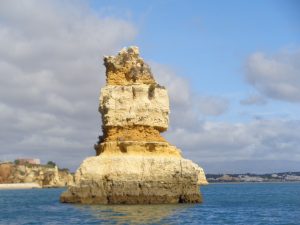 The softer sands eroded by the ever returning tide, the winter storms and the winds of time leave shapes that can be imagined into animal forms, shapes that invite exploring and shapes that simply are visual stages for delight. 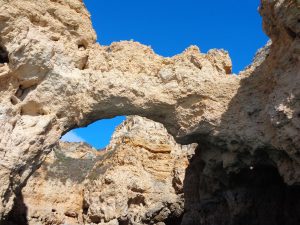 There on that cliff edge a camel head — or whatever your imagination wants. A guardian carrier that can mark the end of a cliff and the beginning of a dream 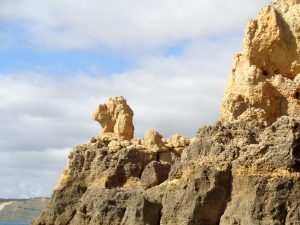 Exploration, pausing, seeing and capturing each gathers an image off cliffs left standing.  Once the waves are done with us what will be standing?  Maybe we’ll just quietly drift off into the oceans and continue exploring. 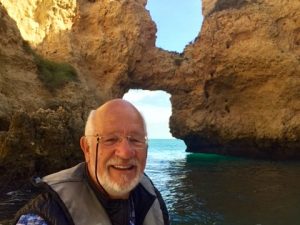