The body count after the inquisition was grim.  The blood in the cathedrals running free. The body count after each bullfight — sad.  Gored fighters and wounded animals.  The trampled spectators in soccer stadiums — ribald.  Fans trampled by each other anticipating death.  I have (or had) friends who are soccer fans.  I have (or had) friends who are devout Cathedral worshipping Christians.  I don’t have any bull-fighting friends.  Yet something in the shared experience of mass market hysteria of church, sports and fighting deserves a shared pause.

The language of the bull fight.  The almost flamenco dance of the matador with bull.The cheering of the crowd and the hushed silence before the end.  All of it in a song writer’s phrase, “the sounds of silence..” Bled dead. 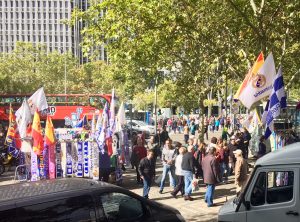 The stadium of soccer hooligans, the celebration of pop-up memoribalia, the black market trade in knock-off souvenir garb and the unrealistic salaries all point to the degeneration of sport to entertainment.  Reality television!!! 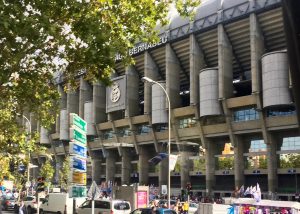 The church pews are empty, silver threaded heads populate seats leaving a generation gap at the altar.  Long standing faith traditions are lost to the scars of inquisitions, shunnings and gossip.  Wandering the streets in Madrid it became evident that all three traditions (church, soccer, bullfights) attracted crowds and in their demise each left the blood of self-righteousness on a civilization. 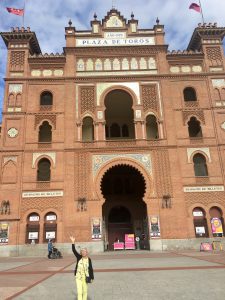 One thought on “Closing Stadiums, Bull Rings and Cathedrals”