There was a time when all credence went with, “I read it in a book.”  That assertion was aimed at stopping all debate/discussion/argument.  Printing after the initial novelty of post reformation access to printed text, has seen limited scrutiny of it’s darker side.  The Jan/Feb issue of “The Atlantic Monthly” carries an insightful glance by columnist Cullen Murphy.  Murphy asserts with historical context that the disruption of the printing press was more adverse than imagined.

The advent of moveable type made it possible for theologians to dark-age a church creating books that enhanced gender inequality and promoted slavery.  Books that justified colonialism and the rights of conquest.  Books that slanted translations to honour the dominant culture.  In her writings Elizabeth Eisenstein drives home the point that the world was never the same again.  The printing press according to Eisenstein upended the social order in ways no one anticipated and that “few today give any thought to.”  When she published “The Printing Press as an Agent of Change” in 1979  before the age of the computer and before the Internet started to work their will on culture. Till her work no one had undertaken a scholarly look at the invention’s long term effects.  The printing press decentralized the role of “gate-keeper”.  In an older scribal cultutre maintaining control over ideas was straightforward.  In a printing press culture control became more difficult.  For sometime the church and official educational systems sanctioned certain books, but eventually they both lost that control.  Suppression of good ideas and bad ideas became problematic. Eisensteins point was that the world was never the same after Gutenberg. 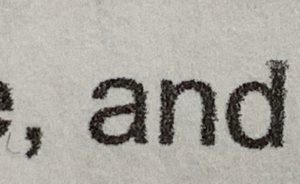 Maybe the new technologies including Facebook and Twitter simply accelerate our awareness of decentralized control and personal responsibility.  Could it be that the newer technologies are simply accelerated Gutenberg.  Everyone can now set type.  Clearly traditional models of authority (church, school, community) will continue to loose power and the disenfranchised might march again.  Their placards might be print as Bansky parodied it and their reach might be global.