In the courtyard of St Stephens church in Rome the above sign was strung across iron gates. Now I was no migrant seeking assylum, but I was looking for the local 12-step meeting and found it behind the sign, through a cloud of smoke and down the stairs. This was a gathering that spoke a language of empathy.

My memory shifted to all the images of the day, all the signs, all the marks left by Migrants. The first and oldest mark was that of Augustus in 2 BC. Now that is a long time ago and he wanted to leave a mark.

Or years later in equally white marble Igor Mitory a northern European migrant left this bold beheaded John the Baptist sculpture in a church in Rome. On the marble pedestal and in bronze on the main doors.

Across the cathederal from the severed head was a winged angel reaching down to earth. Striking. Ernest Lamag of no fixed address at the time created this for the church. 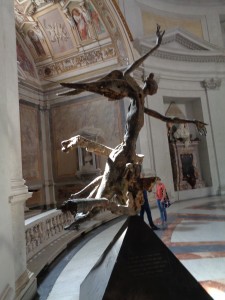 We spent the morning looking at other images left by migrants. The Kokocinski exhibit with all the circus and jester mixed media and all the severed heads and all the community of travelling roadies. This was a spectacular gift from a homeless Argentinian who wandered with the circus for years.

You may think that all this was serious… at the Kokocinski they wouldn’t let me take pictures and at the Goethe exhibit (yes he too was migrant in Rome in the 1800’s) devoted to the Femme Fatale I was easy to catch Margaret poking fun at the larger than life image of a man.

Migrants matter because they have things to say, if we are willing to listen as Job says with our eyes and ears!