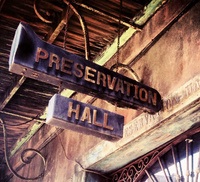 The experiences of Saturday evening in Preservation Hall, Sunday morning in St Augustines Church and Sunday evening at “Giving it Away” were a street car ride apart geographically yet connected by a chord of emotional integrity. The music has played in Preservation Hall for the past 53 years as a historical tribute to an era. Saturday a musical tribute featured Leroy Jones. The smallest venue in New Orleans stacked with bodies on every square foot of space moaned in the constant travail of the new life breathed into every chord, phrase and note.

I first visited Preservation Hall in 1984 and was impressed. On this visit the contrast between the revelling debauchery of the bars on Bourbon Street and the music inside Preservation Hall was more than a clash of cultures, it was a crashing reminder of conflicting value systems. The sign on the wall written in the late sixties foreshadowed everything: “Traditional Requests 5 dollars, Others 10 dollars, Saints 20 dollars”.

Sunday morning we sat in a church pew, early, watching the musicians prepare for Sunday worship. Now one of the travel guides had said that if you want more than a tourists gospel-brunch work your way over to the “Treme” district and find St Augustines. For 173 years this worshiping community has proclaimed the gospel. Yes they had catholic roots, yes the congregation was founded by free people of colour. Yes they hustled the sale of pews to be sure that they remained a dominant people of colour congregation. Yes they bought all the side pews and gave them to the un liberated slaves as their exclusive place of worship.

Tomb of the Unknown Slave

But all this became the roots of the first fully integrated worship community. On October 30, 2004 the community of believers of Saint Augustines dedicated a shrine consisting of grave crosses, chains and shackles to the memory of the nameless, faceless, turfless Africans who met untimely death in Treme. The Tomb of the Unknown Slave is a constant reminder that those who visit are walking on holy ground. There was a quiet awe about this place, these people. We sat reverently as the service began. 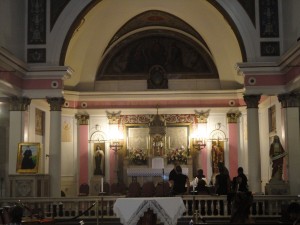 The saxophone echoed music to the purloins and then the voice of the pastor, Emmanuel Mulenga spoke with a clear British accent and disclosed his Zambian roots, I was reminded of a Sunday 3 years ago in Sierra Leone. When he prayed with the congregation for those dying of the ravishes of eboli in Africa, I was united with his concern for those still living in a current slavery. Then the music poured forth with a rendition of “God has not Forgotten” and through the tears and dancing I heard classic jazz voices carry the contemporary joy of freedom from more than slavery on every note.

I was a Stranger and You welcomed me.

Since the late fifties recovery from drugs and alcohol has been supported in small groups meeting regularly in church basements and meeting halls. I was a stranger in New Orleans and like every stop along the past 13,000 kilometres, when I walked into a meeting it was not only the camaraderie of shared experience, it was also the warm welcome home. The “Giving it Away” group was a group made up of people of colour. As you can see in the photo I was a minority of three in a group of 80 persons. I was welcomed. A young man walked into this meeting and shared that this was his first meeting ever and that he was motivated to come after his room mate at university committed suicide and died yesterday in a relapse. The young man was welcomed, carried and cared for. I was thinking afterword about what it takes to preserve tradition, to keep what is valuable and then the music rang true. Keeping faith to musical roots, spiritual roots and recovery roots requires a disciplined commitment. The musicians in Preservation Hall, the musicians in St Augustines and the musicians at “Giving it Away” (yes there is music in the language of empathy) all carried a message of hope. The unknown slave in each one of us could use a good liberation!

The tomb of the unknown soldier in Ottawa may need to shift focus to include in remembrance those enslaved by history and dislocation.

One thought on “Music for the gathered — the faithful, the believers and the redeemed”