The cotton white back busting balls on fields of bushes are more than a history lesson.  They are the natural fibre industry.   With the dominance of petroleum based clothing some consideration or choice of more traditional fibres might be of merit. The polyester leisure suit died! The rolling thunder applauded the cotton fields as we followed the sun across the American south. Along stretches of surveyors delight we saw houses and homes, remnants of glory and collections of memory and even entirely empty towns. 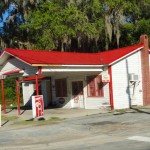 Artifacts of glory and fragments of story punctuated the landscape. There an old plantation. Look a museum. A statue commemorating liberation, be it from the British, the French, from slavery and even from fire. The variety of houses that marked the miles of road in southern Georgia were a tribute to an other era and a testament to the preservation societies that have rejuvenated many a tired exemplar. The classic plantation house and tour sites were interesting, but the ordinary, the failed and the dismembered, were a palette for creating new and renewed spaces for people. 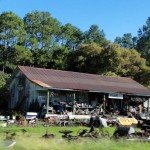 Somehow you might have known that this ALS bucket campaign was going to show up. The success of the media and medium a McLuhan miracle. That abandoned service station, the extended shed of retired farm implements are remnants of the rapture of time. I get this humbling awareness that the bucket of water, like the storm we were driving away from were an almighty bucket of awareness that the medium is the message. A baptism of awareness. Cotton fields speak a liberation story for our times.