The faces of humanity as we encounter suffering creates this montage of thorny issues.  The original film “The Three Faces of Eve” in black and white captures the distortions of humanity caused by suffering.  The Christian calendar has this season labelled as Lent, the suffering days that lead to crucifiction.  One could easily ignore the crown of thorns that surround innocence but the painting of the sculpture simply labelled, “San Francisco De Assis” a bronze sculpture given to the congregation of Guadalupe, captures the blood shed in comic book realism.  The unsettling reality is that this is a child of Eve. 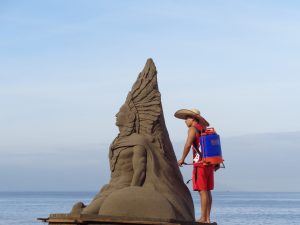 The sand castle, sculpted with meticulous impermanence and maintained like plants with daily watering, capture another history of the displaced children of Eve.  A history lesson without books and words.

Woven into Mexican culture is an unspoken knowledge of the Ezekiel story.  The resurrection of the dry bones.  The capturing into memory those who have created memory and memories for us.  Eternity may be more than a visage of the children of Eve.  Memory may be a simple re-telling of story with divine significance.  In the 12-step meeting space the tiles on the wall marked places for those who have died.

The banner, in Spanish and English, draped over the gathered faithful and tourists, spoke in Lenten purple that all these faces, every face, was a child of Eve and worth listening to.  There is always a story of Resurrection if you are listening.  One night, the old black and white movie might actually move you to sit for an extra minute with suffering.