Some events start as great ideas! Taking the grandkids up the Sasquatch zip line was one of those ideas. They wanted to be sure I was coming along and from the check-in and weigh-in to the harness adjustments this was going to be fun. Somewhere between the chairlift ride to 5000 feet and the dust cloud following us in the four wheel drive van, the reality of what I was about to do sank in. I was going to ride a 2.5 km steel cable across a valley held by a harness and two small steel wheels. The staging platform was a few feet above the ground and the steps up were easy. Our chef de mission told us all would be ok. Watching her swing down the steel cable, twisting, turning, up-side down and even bouncing was not assuring. On the tandem launching platform what looked like a skier’s gate held us back. No one mentioned fear! The four steps on the other side of the gate were more ominous than any set of steps I’d ever done. The fourth step was a twisted metal – an unsure place to stand. The countdown behind me stopped at “go”. The next seconds were frozen with fear and then sensation emerged. The wind at speeds approaching 160kmh pushed my glasses and whole face toward my skull. The harness wanted to twist. The instructions paid off. I spread my legs to deter the twisting and then saw the valley below. A merging of paths and trails and way down there — the river. The brakes worked, the landing was not graceful but effective and then I watched my daughter Miranda come hurtling along the cable toward the brake lines. The adrenaline took hours to subside. 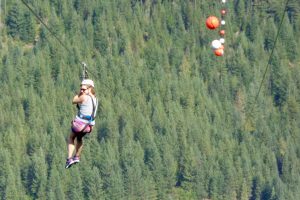 Later that afternoon I stood with my grand-daughter Hannah and my mother and tried verbalize what it was like and my daughter Carrie just said, “it was scary!” My mother simply smiled and later said, “it’s not many mothers that get to watch their children turn 70.” Taking risks and zipping through life is also about staying the course. Four generations! 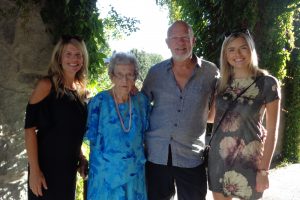 One thought on “Zip n Zipping Along”