They tried draw my attention to the elephant outline, ok shape, maybe just tusks, alright use your imagination — in the cave stalagmite stone was a formation, that like with the classic roschach ink-blot test, could be with suggestion turned into an elephant.  In looking as directed I missed the big picture.  These shapes had taken millennia to form and the canoe paddler was peddling for his share of nature’s bounty.  The inflatable canoe was home for three trips through the tunnels and around the islands.

Those were easy trips.  Sunshine and warmth.  Laughter and story.  In the harbour the working long boats rest for the evening while waiting for the turn of the tide.  Within the next hours they will launch nets to catch fish for the morning market.  Survival is a strenuous task.

The young woman has drafted her father to cut Tamarind leaves to display in the morning market. The family meal, the family savings and the family unit is held together by the shared activity.  These are peddlers of necessity.

In the bay between the islands the princess waves at her loyal subjects.  A glimpse at a horizion sculpted with mountains, clouds, paddles and waving arms.  An explorer’s canoe seeking a new world.

Floating on an ebbing tide through the tunnels and caves Margaret is seen catching a glimpse of daylight, a beam of hope as we emerge from the darkness of the massive caves. 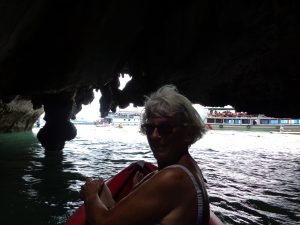 Once out of the shadows the women rejoice in beams of gleaming sunlight.  Carrying the knowledge of having paddled with a peddler through the limestone caves.  In the sunlight the tasks of peddler and paddler emerge and converge. There is an elephant in the room.  We are enjoying this visual feast in a country that is struggling with loyalty and the passing of royalty.  We can see the elephant in the ink-blot and in the media.  Can you see that your elephant is a petrified relic? 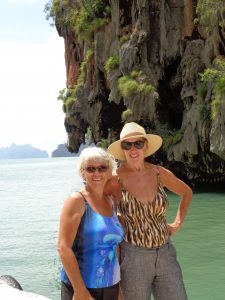