The parade was one of mythical creatures and ordinary hooligans spraying the spectators along the entire route with what appeared to be 15 cm Roman Candles. The sparks were poured on anyone and all children. Family members and parents were well hooded and eye-protected. The tourists clearly were not! 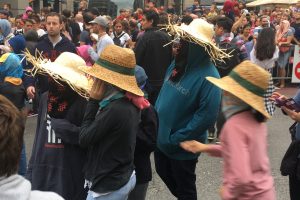 The parade with roots going back to 1871 celebrates with special activities the city of Barcelona and is named after her own patron saint. The three day event is now wrapped around a holiday weekend and the music, lights and fireworks became a celebration that enfolded every visitor in singing, dancing, laughing and celebrating local talent. 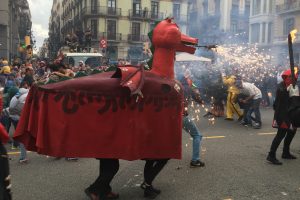 From the local drum teams to the high school bands everyone participated. The origins of La Merce as patroness of Barcelona date back to the seventeenth century when in 1687 a locust plaque infested the city. The community prayed to the Virgin of La Merce and the plaque ended. An act of gratitude named her patron saint of the city. In 1902 Pope Pious IX ratified the celebrations and the festival was augmented to its’ present status as a three day celebration. 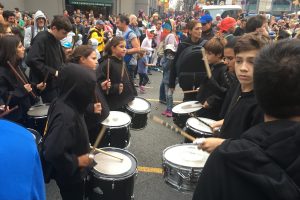 Keeping the drum beats steady had a lot to do with warding off evil. In many civic and religious festivals around the world (think of Indonesia, India, China, and many others) the noise of drums was part of chasing away evil and making room for healing and health. 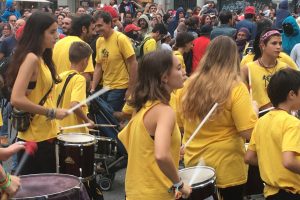 There down the street was a team practicing. Mom’s adjusting costumes and spark shields. Protection for children and tradition for parents.

Between the sparks a tradition of redemption – a community sharing story with tradition and festival. Those are holy sparks and could start a fire. Tradition is risky! 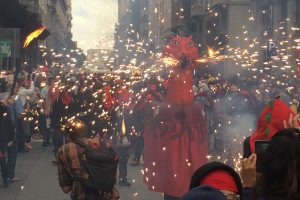