The title image from a painting by Jacopo Tinteretto painted somewhere between 1560 and 1570 captures a feasting that knew no bounds, a revelry that would make any middle ager proud. On the table being served is roast rabbit. The scene often referred to as the Wedding at Canaan. Now you knew I was going to sneak the lucky rabbits foot into this conversation about the Last Supper. What Tinteretto captures is exactly what Luini captures in his version of the Last Supper. 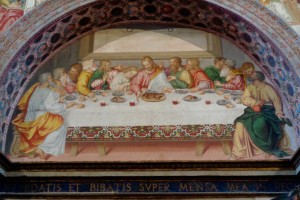 Aurelio Luini was a pupil of DaVinci and he learned the lessons well. Perspective, focus, colour and an integrity that went beyond icon and popular culture. The doors of the Reformation had already permeated the artistic community and Luini and his two sons painted significant frescoes in the Benedictine Convent at San Maurizio a kilometre away from the dinning hall at the Dominican Convent of Sta Maria della Grazie. The close up of the painting shows roast rabbit. Ordinary food!

What we came to see was the original ( well as good as an artistic scientific makeover with botox and plastic surgery gets) of the Leonardo DaVinci. It did not disappoint, and the scholarly guide who clearly understood the individual rolls and the Gospel of John roots of an ordinary meal with friends. The simplicity without the theological weight. Wafers and loaves of bread may have acquired icon status, but I think the painters had it right, ordinary food and drink. There is no ceremony.